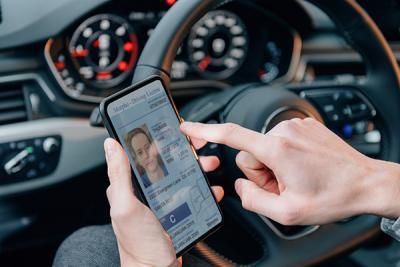 In the United States, MorphoTrust has transformed the conventional driver’s license into a smartphone app to extend its capabilities securely and conveniently.

This observation led to the idea of transforming a conventional driver’s license into a smartphone app, something that was quickly embraced by Mark Lowe, Director of the Motor Vehicle Division at the Iowa Department of Transportation.

The idea was to take the conventional driver’s license to the next level. The app harnesses smartphone capabilities to establish a secure connection with the outside.
Mark Lowe, Director of the Motor Vehicle Division at the Iowa Department of Transportation

It enables a wide variety of high value use cases, including police checks of proof of identity to access secure premises and commercial aircraft, identity authentication to obtain deeds and other legal instruments, and point of services purchases such as alcohol, tobacco and lottery products. It also takes customer convenience to a new level for the agencies that are responsible for issuing secure credentials to their residents.

The idea appealed to the U.S. state of Iowa which, in 2015, agreed to take part in a pilot. Around one hundred of its agents were entrusted with smartphones featuring the mDL (mobile Driver’s License) app. To activate it, they were required to enter their e-mail and a pin code and as well as take a selfie. The app then compared the selfie with the image held by the state to check their identity before letting them use the application. The comparison phase is made possible thanks to a piece of MorphoTrust technology (FRT: Facial Recognition Technology) which is already used by 35 U.S. states as well as the Department of Defense, Department of State, and other law enforcement agencies. “However, it’s the first time an image produced by a smartphone has been used for facial recognition in the United States,” explains John Hilliard.

An asset for citizens, police officers, merchants, bankers and attorneys, among others

The secure and authenticated transmission of information means that the mDL can be updated immediately without needing to visit a Motor Vehicle Agency (MVA), where secure driver’s licenses are applied for and issued. This appeals to forward-thinking administrators like Lowe, who are responsive to trends and customer/citizen demands. In addition to providing greater convenience for the public, the mDL reduces reliance on bricks and mortar offices and personnel, creating quicker service and improved customer satisfaction for MVA customers. Police officers, when they stop a car, can communicate with the user of the smartphone and know who they are dealing with before they get out of their vehicle, which reduces the potential risks related to questioning and providing a safer encounter for both the officer and the motorist. The mDL may also prove to be useful for merchants, adds Hilliard: “They can use it to securely check that the purchaser is old enough to buy products such as tobacco, alcohol and lottery scratch cards.”

“We have identified over 60 possible use cases,” explains Hilliard. Scanned with another device featuring a verification tool, the mDL can be used as a secure and reliable form of identification for opening a bank account, purchasing a house, accessing secured premises or boarding a plane, for instance. It could even be used to make purchases instead of a bank card.

The pilot initiated in Iowa has been extended until the end of June, 2016, with a Phase 2 pilot expected shortly thereafter in Iowa to expand the use cases, implement additional device and infrastructure security, and adopt a broader distribution method.