AirTag and the m-commerce boom

With its mobile loyalty, ordering and payment solutions, AirTag, part of Safran Identity & Security, is meeting the future challenges of changing usage patterns for mobile services. Its AirShop solution has already won over numerous customers, with very promising opportunities ahead. 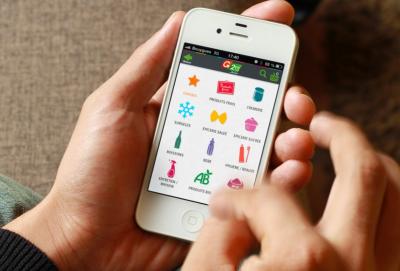 AirTag has been pursuing growth opportunities ever since it was acquired by Safran Identity & Security in 2015. AirTag’s innovative AirShop solution for secure and contactless mobile payment and loyalty programs for the retail sector has won over numerous customers. Last February, the organizers of the Mobile World Congress in Barcelona – the eagerly anticipated annual event devoted to mobile technology – used AirShop to manage visitors’ mobile orders. This partnership which began a year ago has already been renewed for next year’s event.

For example, the platform is used by the French G20 supermarket chain for their m-commerce solution with a feature that makes it possible to display products in 3D. For the Dia supermarket chain, Airtag developed a click & collect tool (a smart commerce system that also enables staff to provide a better level customer experience), enabling users to order from a mobile app and pick up goods in the store. Other Airtag customers include Le Duff Group, Brioche Dorée, Carrefour, Ronde des Pains as well as Casino supermarkets.

The team of developers is currently putting the finishing touches on an order and home delivery module for the quick service restaurant chain KFC in the United Kingdom and Ireland with the YUM! International company. Talks are also underway to incorporate an in-store mobile payment solution, marking a new chapter in the AirTag success story.

In 2015, the company had already developed a comprehensive loyalty and couponing solution which is now used in 1,300 of KFC’s points of sale in the UK. “In practical terms, the solution is based on an e-wallet application in which customers can manage their loyalty program and take advantage of promotional offers using their mobile phones,” explains Guillaume Massis, co-founder of Airtag. “We have also hooked up the platform to the checkout system so that the entire discount coupon life cycle can be managed.” The ultimate goal is to improve customer experience. And the project has proven its success, with the number of customers already exceeding the one million mark. AirTag was even named IT Supplier of the Year by the KFC franchise.

Quick service restaurants are a first-choice sector for us because loyalty and speed at checkout represent major challenges. We have a great deal of added value in this market.
Guillaume Massis, co-founder of Airtag

With the m-commerce boom, the outlook is promising. Guillaume Massis is enthusiastic about challenges and new projects: “With Safran Identity and Security behind us, we offer more opportunities and increased clout.” The next step involves offering AirShop and AirPass (mobile payment platform dedicated to banks and financial institutions) to the DSA Division’s portfolio of customers “For example, we can already incorporate some AirShop modules, such as the one devoted to customer loyalty, into pre-existing platforms so as to offer customer more secure and practical integrated solutions. It’s a great source of development.”