Changi, a worldwide first for MorphoPass

Singapore’s Changi airport has selected the MorphoPass biometrics solution for its new terminal. A worldwide commercial first that will certainly not be the last…

The MorphoPass project was born from a simple observation: today’s processing of air passengers and their carry-on luggage is essentially based on manual operations, which leads to long lines for travelers. In addition, the current process only partially guarantees the necessary level of security and is not fully optimized in terms of operational and economic efficiency. This is a shared concern amongst stakeholders as more than 4 billion people travel by plane and air traffic is increasing by 5% every year, even more in emerging countries. Over the past few years, low cost carriers have developed requirements based on automation, efficiency and cost, but also on quality of passenger experience.

The project is therefore focused on three points: improving security, operational efficiency and passenger experience. To meet these three needs simultaneously, Safran Identity & Security relies on its solid expertise in biometrics. This technology presents several clear advantages for air transport: biometrics is the only fully universal data model –a passenger simply stands in front of a camera without needing any specific knowledge of the local language or culture. And most of all, it’s much safer than traditional manual control methods. It’s hard to change one’s face, fingerprint or irises between bag check and boarding, whereas a boarding pass or passport can be easily destroyed, exchanged, lost or forged. Furthermore, experiments have shown that manual document controls could fail to detect one in five passenger’s correct identification.

In 2014, several representatives from Civil Aviation Authority of Singapore and Changi airport were very interested in the project. A hub for Singapore Airlines, Changi is recognized as the leading airport in the world for its quality of service. Changi processed more than 51 million passengers in 2012, according to Airports Council International. It ranks 7th among Asian airports and 15th worldwide with its three terminals. Terminal 4, dedicated to low cost carriers, is currently under construction and will demonstrate the same commitment to quality and security with a nominal capacity of 16 million passengers annually.

The MorphoPass solution that will be used in terminal T4 of the airport is based on three steps.

The system is set to be operational by the second half of 2017 and will be able to manage nearly 30,000 passengers per day. MorphoPass solution also reached a milestone : the immigration authorities of Singapore requested Safran Identity & Security for passagers arrivals. 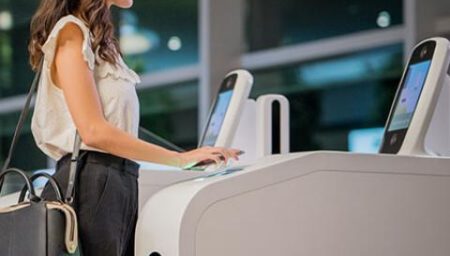