The Subscriber Identity Module (SIM) has been a significant contributor to the unprecedented success story of the Global System for Mobile communications and the trailblazer for all kind of secure elements. This is best expressed in the impressive growth of worldwide subscriptions, which climbed from 34 million in 1993 to more than 7 billion in 2015. 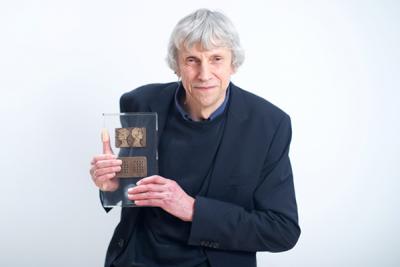 Through these years Hanno Dietrich has played a vital, pioneering role in the development and definition of this technology that has changed our daily lives forever.

The highly regarded Fraunhofer Institute for Secure Information Technology SIT has recently recognized this lifetime achievement: Hanno Dietrich was awarded the prestigious SmartCard Workshop Prize 2016 for his contributions to the international utilization and efficient introduction of the smart card technology to the world’s most important mobile networks.

Hanno Dietrich started working for Safran as a developer in 1987, a time, where processor based smart cards was a topic to insiders and not recognized by the general public. One of his first important projects was the development of the chip software for an early field trial of the “ec-Card” in 1989, the first chip based banking card in Germany, which was designed as a multi-application card, ready to be used for public telephone calls. 1991 saw a most significant milestone: The development of the first functional SIM card for “Deutsche Telekom” to be used at the launch of the GSM network in 1992 in Germany – a key step for the company to become a global leader in SIM card technology. Hanno also started representing Safran at international standards committees in the early 90s, working with the industry to evolve the SIM card for the next generations of mobile communications. As such and among others he took part in traversing the mono-application SIM to the UICC, the platform for telecom and other applications and the 3G network access application, the USIM, which is also used in 4G or LTE.

The Fraunhofer SIT Institute particularly praised his commitment to the first successful developments and realizations of the SIM card and its interface to the mobile device: For more than 20 years now the globally renowned expert has been an active part in the evolution of SIM specifications by cooperating closely with the industry in international standardization committees such as 3GPP, OMA, JC Forum and GSMA.

My work representing Safran at the multitude of international standards committees, and assessing the technology options and implementation for the company has enabled me to be involved in some amazing and exciting projects over the years. There is still more to be done: the new secure element technologies currently being developed will bring even more chances and challenges to improve the daily lives of us all. IoT is the keyword here.
Hanno Dietrich

Since the end of the 1980’s the robust security provided by SIMs has been successfully and widely adopted for mobile systems and handsets. Today the challenge is to conquer the Internet of Things (IoT), as objects that connect to mobile networks, need a secure element containing a SIM. For this purpose a new generation of SIM had to be designed to address the special challenges of an environment where the SIM is not easily accessible, replaceable or removable. It needs to enable the secure and remote download of what we know as ‘electrical profiles’ and their related subscription credentials, their activation, deactivation and modification. To deliver these functions, a new secure element platform was created to remotely manage what may be called virtual SIMs: the embedded UICC or eUICC, sometimes also named eSIM.

The industry is again facing a new paradigm shift: Safran is still at the pioneering heart of it, driving its technological development and commercial deployment in groups such as ETSI, 3GPP, GSMA, GlobalPlatform and SIMalliance. Thanks to the work of technical experts like Hanno Dietrich, we ensure that the new secure element technology remains safe, interoperable and optimized – making our daily lives safer and easier!