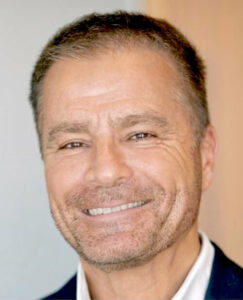 Dominique Cerutti comes with over 35 years of experience in Technology, R&D and Engineering services.

He has held several CEO positions of leading technology companies and his expertise in growing large-scale international businesses will be a significant contribution to IDEMIA’s strategic vision.

Dominique is a very seasoned leader with a demonstrated track record in transforming and growing large-scale international technology businesses. He will be instrumental for the Group moving forward
Pierre Barrial, IDEMIA Group President & CEO

We are pleased to welcome Dominique Cerutti to the IDEMIA Board. With more than 35 years of experience, Dominique is an undisputed expert in security and technology and a tremendous addition to IDEMIA’s Board
Yann Delabrière, Chairman of the Board

I couldn’t be more honored and thrilled to be joining IDEMIA, global leader in Augmented Identity, at an exciting time in its development. I look forward to offering strategic guidance and contributing to making the world a safer place
Dominique Cerutti

Starting June 2015, Dominique Cerutti spent 5 years as Chief Executive Officer of the Altran group. He was also Chairman of the Altran Board from June 2015 to April 2020, until the acquisition of the company by Capgemini. Under his leadership, Altran has become the undisputed global leader in Engineering and R&D services, growing from 20,000 to more than 50,000 engineers worldwide, with revenues up to 3.2bn euros. He has deeply transformed the company by adapting the organization, promoting new business models and driving major acquisitions, enabling Altran to stay ahead of the competition, drive the market and reshape the global ER&D industry. Fervent advocate of the acquisition by Capgemini, he has worked hand in hand with the Group to make the integration a success and stepped down at the end of 2020.

Before joining Altran, Dominique Cerutti was CEO and Chairman of the Managing Board of Euronext, the leading pan-European exchange. He established Euronext as an independent company and the leading pan-European Exchange, through a successful IPO following the acquisition of NYSE-Euronext by the ICE Group in November 2013 and the subsequent demerger of Euronext from NYSE. He led the strategic repositioning of Euronext as the premier pan-European financing center. He and his team have been deeply involved with the correction of the previously biased EU financial markets regulation, promoting transparency and increased investors protections within the EU financial markets.

He was previously President and Deputy CEO, and a board member of New-York Stock Exchange (NYSE), the world’s leading exchange Group.

Dominique Cerutti also spent over 20 years at IBM in an international career, where he contributed to the company’s strategic transformation. In particular, he served as Chief Executive Officer of IBM Global Services for the Europe, Middle East, Africa, and later for IBM Europe, after being Executive Assistant to Lou Gerstner, Chairman and CEO of IBM.

Since March 2021, he is chairman of Adarma’s Board, one of the largest independent security services companies in the UK.